What RVers Need to Know About Guys with Guns on Baja

"Mexican Immigration Officers are unarmed, whereas the US Border Agents have guns" 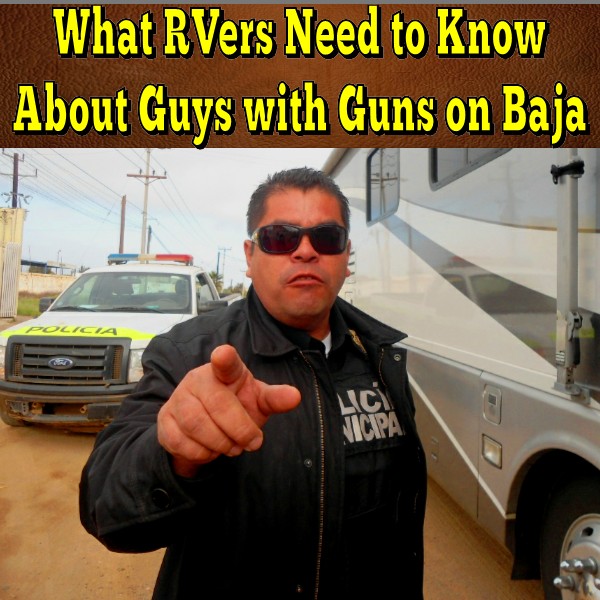 What RVers Need to Know About Guys with Guns on Baja

From the moment you enter Mexico you see men in uniforms with guns, not unlike the experience entering the US or for that matter Canada.  The difference is the Mexican Immigration Officers are unarmed, whereas the US Border Agents have hardware.  The guys with guns at the border (we cross at Tecate, Baja) are Army lads and often the local Municipal Police.  For those RVers that were warned by friends and family that they would die in a hail of bullets when they crossed the Mexican border their lives flash before them.  In reality the Mexican government believes this show of force will make tourists feel safer, for Americans perhaps, for Canadians not so much.  From this point south on Baja tourists commonly encounter Federal Police, Municipal Police and the Military (usually Army) it is important to understand the difference and the roles they have on Baja.

On Baja from the US border to Cabo San Lucas you will encounter several on Hwy 1 although the number of these military checkpoints varies throughout the year; you can expect to encounter approximately six of these stops scattered along the highway.  Many RVers feel intimidated by these young men in camouflage fatigues and big guns; you should not.  Their purpose is to capture the bad guys involved in drug trafficking and other illegal activities, not to harass unsuspecting tourists in RVs traveling the highway.  Let’s be clear, they are serious about their jobs. 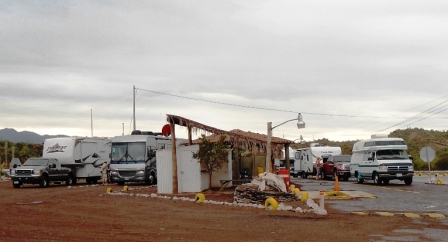 Heading southbound often your RV will just be waved on through and be on your way.  Sometimes not so, and if the Officer in Charge signals for you to come to a complete stop, lower your window and put the vehicle in park.  The soldiers have been trained to be courteous but firm with tourists.  Remember don’t expect much of the conversation to be in English.  Usually their first question will be, “Habla Espanol?” (Do you speak Spanish?)  If you don’t, most of the communication will be broken English and pointing.  They may ask you, “Adonde va?” (where are you going?).  Conversely, “De donde viene?” is (where are you coming from?).

If the officer asks to inspect your RV, you and your passengers may be asked to step outside, often not, depending on the size and type.  They may open cupboard doors, look under seats, perhaps even check out your bathroom.  The fancier your RV the more curious they may be, these young men often come from very poor regions in southern Mexico and your RV is a palace on wheels. Most inspections are completed within a few short minutes and you should soon be on your way.  Unless heavy traffic has caused a backlog of slow-moving cars on the approach to the checkpoint, the event will hardly make a difference to your journey’s itinerary.

Our advice is smile, be polite, do not offer anything (like a cold beer or Pop). We have never had anything taken or go missing during an inspection.  Just make sure they shut your fridge and freezer door properly or else the contents will be everywhere (particularly if you are towing).

Possession of illegal drugs, guns, shells or other related paraphernalia is prohibited on Baja and there are no excuses.  Believe us you do not want to see the inside of a Mexican jail.  We have often thought these checkpoints would be very handy to set up in Surrey where we live.

Save 50% Off Campsites with Passport America 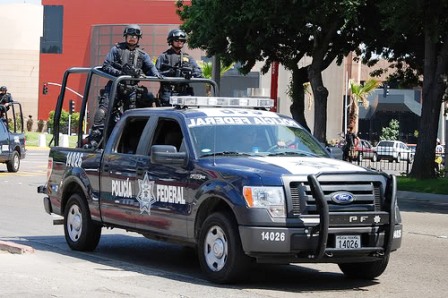 This is actually a slang term; the Federal Police (Spanish: Policía Federal, PF), formerly known as the Policía Federal Preventiva (Federal Preventive Police), are the uniformed federal police force of Mexico.  The agency is directed by the Secretariat of the Interior and was created in 1998 by the merger of several other federal police agencies (the Federal Highway Police, the Fiscal Police, a Military Police Brigade and an Interior Ministry intelligence unit) in order to better co-ordinate the fight against the growing threat of drug cartels. Travelling on Baja you are likely to encounter members of the highway division who have been operating radar and sometimes checkpoints (if they are looking for a particular someone).

Sometimes they are in pickup trucks, most often in the new Dodge Charger Pursuit Cars and are well trained and well paid by Mexican standards.  Normally you would have little interaction with these guys who we have always found to be very professional, friendly and usually travel in pairs.  We have never had any trouble or problems with the “Federales”.  It is not uncommon to be passed by the feds with light flashing when we have the caravan on the highway on their way to a call.  Increasingly the Municipal police are being replaced by the Federal Police; this is a good thing. 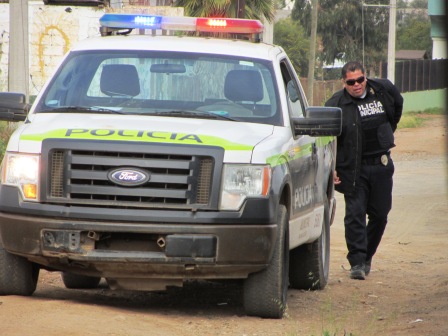 All the stories you have heard about “crooked cops” or paying “bribes” to police usually always involve the local or Municipal Police.  In Mexico there are over 1,600 municipal police forces, which translates to 366 officers per 100,000 people, which equals approximately 500,000 in total.  Unfortunately systemic corruption is endemic and police forces are often poorly trained and underpaid. The average wage of a police officer is $350 per month, similar to that of a construction laborer, which means that many police officers supplement their salaries with bribes or morditas (little bites).

Over the past five (5) years and 23 tours of Baja we have experienced 3 interactions with the Municipal Police.  In La Paz (Baja Sur), Tecate and Maneadero (Baja Norte).  Twice when confronted with the group, asking for ID, taking photos etc, the officer left with nothing to show for his efforts.  We always ask that the group stays together as a caravan and if a problem arises we will deal with it collectively.  In Tecate, 5 minutes from the US border, one RV followed closely by a Policeman went thru a red light.  They pulled over immediately (despite our attempts to have them stay with the group) and ended up paying $50 US cash.  At the end of the day, this was cheap compared to the same infraction in the US or Canada.

In some locations like Tecate, traffic tickets are paid at the Police Station.  Cities such as Ensenada or Cabo San Lucas, citations can be paid by mail.  Important to know that paying a bribe in Mexico is a crime as well as receiving one.  Our advice is first and foremost, remember you are a guest in Mexico.  Becoming an indignant gringo and being aggressive or confrontational could result in an escalation you would be better to avoid.  You maybe somebody at home but you are a nobody here.  Be respectful and perhaps even allow the officer his power trip.  You MUST provide proof of registration and driver’s license.  An officer WILL confiscate your foreign license on a written infraction.  In years gone by, some drivers carried a duplicate license or just resigned themselves to getting a new one at home.  If you believe the charges or allegations are false we suggest you ask for a ticket, “Dar me un ticket, por favor”.  Be polite but firm and if they threaten you or get nasty, write down their name, or if they are not wearing their name badge, (mandatory, but still they often don’t wear it when they are up to no good), then haul out your phone and take their picture.  They will not like this and usually let you go with “just a warning this time”.  They rarely write tickets, and for sure they will not cite you when you haven’t done anything wrong.  If you have broken the law, the ticket is often very small so just pay it.

Always best to mind your “Ps and Qs” when driving on Baja.  Stop at stop signs, do not run lights, steady and slow is the best approach!  Do not talk on your Cell Phone (CB or FRS Radio), keep your seatbelt on and do not speed.  What is frustrating sometimes is to watch all the Mexican traffic around you violating all of the above rules, sometimes at the same time, unlikely however that they have any extra funds to pay the “Policia”.  In the event you get pulled over, keep calm, you have lots of time.  You can always call the Tourist Assistance Hotline 078 and remember fines are always in pesos.  In the event you find yourself confronted by a local Policeman seeking some US cash, please do not pay them.  Rewarding bad behavior only reinforces encourages more bad behavior.


Get Your Article Published on Everything About RVing


Do you have any suggestions or comments on this topic? You can add them to this page by using the comments section located near the bottom of this page.