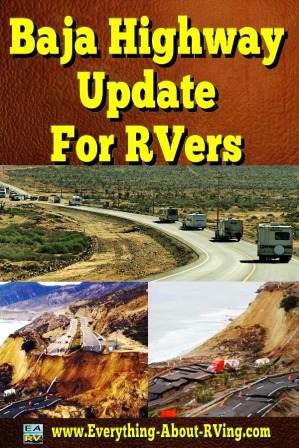 Impact of Hurricane Odile on the Mexico Baja Highway

The report below was prepared following our last season where we left Baja in April.  Hurricane Odile made landfall at Cabos San Lucas and was a monster, the largest Chubasco ever to hit Baja, maybe even Mexico.  The hurricane was 600 miles (1000 KM) wide and travel up the spine of Baja not heading east until Bahia de los Angeles.  Many sections of HWY 1 sustained damage, both flooding, road washout and collapse.  Within 3 days 90% of the hwy was passable again as equipment and manpower has been assembled on mass for repairs.  Despite the damage we are confident the highway will be open and very passable by the end of September.

One of the biggest knocks about RVing on Baja has always been the narrow highway(s).  In the early 70s after Highway 1 had been completed to Cabo San Lucas, Snowbirds streamed in with their RVs on mass and headed south.  They loved what they found, friendly folks, great fishing, sunny skies, warm winds, stunning vistas, empty beaches; a veritable perfect paradise.  Just do not leave the road as you would be unlikely to get back on without a tow truck. Yes the main highway, Carretera Transpeninsular Benito Juárez commonly referred to as Hwy 1, was narrow, often less than ten meters (19’ wide with 9.5’ lanes), lacking shoulders and guard rails that didn’t guard much.  Those that made that journey back in those days steeled themselves for the trip south, hands clutched to the steering wheel, eyes riveted to the road at all times.  This was an intense experience of course always worth it given the destination.  Since our regular return to Baja in 2000 the roads have been improving dramatically with various sections being rebuilt, repaved and redesigned constantly.  Haven driven Baja 20 times in the past 5 years we really take notice! 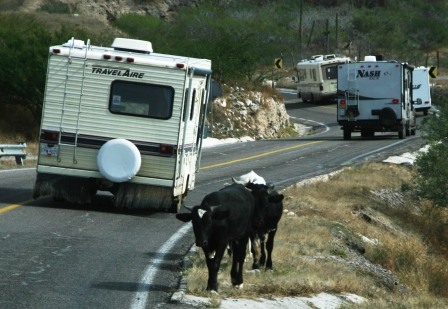 RVing Down a Mountain Road in Mexico

You have your choice of either a toll road (4 lane divided highway) or free road from Mexicali to Tijuana thru Tecate.  Both are in great shape although the toll road is more costly you avoid the traffic and it is much faster.  At one time we regularly drove toll 2 from Tecate to the outskirts of Tijuana, not so much since the collapse on toll 1 at La Mision.

This was built in 2000 and provided a divided 4 lane expressway from Toll Hwy 2 to the Pacific coast.  The original design had this highway directly connected to Toll Hwy 1 and terminating on Libre 1 at Popotla.  Unfortunately that never happened although recently a northbound exit has been completed off of Toll 1 onto Corridor 2000.  This was a great alternative to Hwy 3 from Tecate to Ensenada, particularly when it was undergoing major construction a couple of years ago.  Once you terminate onto libre 1 you head south and can rejoin Toll 1 just south of Puerto Nuevo.

RVing Down Highway 5 in Mexico

Starting in Mexicali, Hwy 5 heads southbound to San Felipe, Puertecitos, Gonzaga Bay terminating at Laguna Chapala at Hwy 1.  We were last on this road between Christmas and New Years in 2012.  We have had many friends drive this since then.  Once you get through Mexicali Hwy 5 starts out as a very good 4 lane highway narrowing to 2 lanes then widening again to 4 lanes before you enter San Felipe, this is an excellent highway.  You then have to make your way thru San Felipe, past the airport and onto Puertecitos.  This section of road is much narrower; however the real problem is the short and deep vados (dips), lots of them.  These are real trouble for those pulling any kind of trailer for sure.

At Puertecitos the road heading south is new and remarkably wide, some of the best road on Baja with paved pull outs where you could park an entire RV Caravan.  This continues all the way to Gonzaga Bay (Bahia San Luis Gonzaga).  After that, now heading west, the road is gravel thru Coco’s Corner and onto Laguna Chapala and Hwy 1, almost 40 km.  Some of this is terrible washboard and not recommended except for a truck and camper.  We understand the “plan” is to complete the pavement in the “near future” from Gonzaga to Hwy 1, rebuild the road from San Felipe to Puertecitos and build a new bypass around San Felipe that takes you to the airport and hooks back into Hwy 5 southbound.  When that happens, RVers will be doing handsprings as the Hwy 1 corridor from Ensenada south to Lazaro Cardenas sees a lot of traffic, can be congested and stressful driving particularly with an RV. 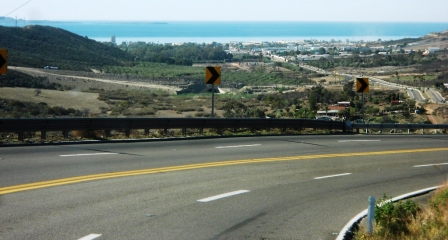 Highway 3 Down To The Pacific Ocean

Over the past few years most of Hwy 3 from Tecate to Hwy 1 just north of Ensenada has been rebuilt.  Wide lanes, new pavement, even wider paved shoulders and in some sections 4 lanes are a remarkable improvement over the former narrow and potholed road of the past.  Of the approximate 60 km of this section of Hwy 3 only 19 km of the old highway remain.  On our last tour leaving Baja in April it was clear that they continuing the road work that included a bypass around Ensenada.  This has become a very enjoyable drive; unfortunately it is seeing a lot more traffic given the collapse on Toll Hwy 1.  We cannot really say much about Hwy 3 from Ensenada over the mountains east to west from Hwy 5 as we have never driven this, Mike & Terry Church (Camping Mexico’s Baja) tell us it is paved and suitable for any RV.

This is the west coast loop that links Cabo San Lucas, Pescadero and Todos Santos returning to the junction of Hwy 1 approximately 25 km south of La Paz.  Since the G20 held in June 2012 in Los Cabos the new 4 lane Hwy 19 was completed to Todos Santos.  As of January 2014 a bypass has been completed around Todos Santos.  The 4 lane highway from Todos Santos to the junction with Hwy 1 has been completed for a completed for a couple of years.  This road is a good as you can see anywhere in North America and if that is not enough another bypass is currently in construction around Los Cabos. 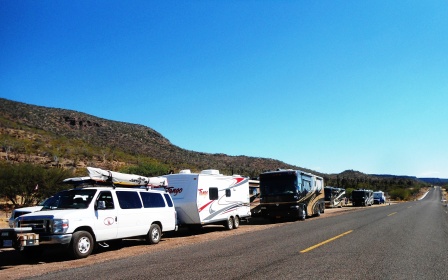 Hwy 1 starts at Tijuana and ends in Cabo San Lucas and has been in a major transformation for years.  At one time we would diligently note the new and improved roadways that were far and few between in our Baja Almanac, now we just take note of the older crappy sections, that is a big change.  You have both a toll and free Hwy 1 from TJ to Ensenada, for the most part the inexpensive libre is a good road with lots of stops and traffic.  The toll Hwy 1 was an excellent thoroughfare between Tijuana and Ensenada, not that expensive with little traffic.  That all ended December 20, 2013 when a significant section of the entire highway (north & south bound lanes) fell approximately 100 m into the Pacific Ocean.  They have stated this should be open again in 2015 and in the meantime folks are diverted to the libre road.

Leaving Maneadero (a community south of Ensenada) Hwy 1 has seen some very significant rebuild all the way to Santo Tomas including cutting a pass right thru the mountain side and eliminating a nasty switchback.  Also in the north this season, we have seen construction and rebuild of Hwy 1 north and south of San Vicente almost to Colonet, repaving and some widening around Jaramillo and the section from El Pabellon south for 20km until you make the turn at Canada San Quintin toward El Rosario has been repaved.  Continuing south about halfway up the incline to the Mesa el Rosario you return to wide lanes and paved shoulders which continues thru El Rosario past the El Rosario Arroyo for another 10 km or so and again widens at KM 92 to KM 132 narrowing near Guayaquil.  The next newer wider stretch starts about San Martin past Cerro El Pedregoso with newer pavement at Laguna Chapala section of Hwy 1.  The last significant section of newer and wider road starts at Neuvo Rosarito ending approximately 12 km north of Jesus Maria.

Oddly enough the only remaining older narrow section on Hwy 1 in Baja Sur is the 72 km corridor from Guerrero Negro and Vizcaino.  We know there are plans to rebuild this roadway that would include 4 lanes, however the local communities seem opposed, even erecting billboards stating so, not sure why as this is as straight and level as you can get on Baja.  The remainder of Hwy 1 on Baja Sur is wider than anything we ever experienced in 1985 as it has continually undergone repaving and widening for years, it is amazing how much difference a couple of feet can make.  Road construction to note this season is the Loreto, Airport, Nopolo, Puerto Escondido southern section of the highway.  The first 5 km is complete resembling a runway and the construction continues at a fevered pace, simply amazing.  An hour further south driving west into Ciudad Insurgentes, the 4 lane connector to Ciudad Constitucion and onto to Santa Rita, the highway is being completely rebuilt, some of which was completed on our departure in March, other sections just getting started.  Lots of spurs that off Hwy 1 to destinations such as Bahia la Asucion, Punta Abrejojos, La Ventana, San Javier or Puerto Agua Verde have been recently upgraded from gravel to pavement either fully or partially.  We have also heard of a new west coast highway heading north on BCS 53 towards La Purisma and intersecting with Highway 1 north of San Ignacio.

At the end of the day, although no one in an RV likes driving thru construction, it is all good!  As they say on Baja, TODO BIEN!