FTC Disclosure: I get commissions for purchases made through some of the links in this article For more information, visit our Advertising Disclosure Page.

Don't Miss Out! All Good Sam Roadside Assistance Plans Are 50% Off! Learn More! 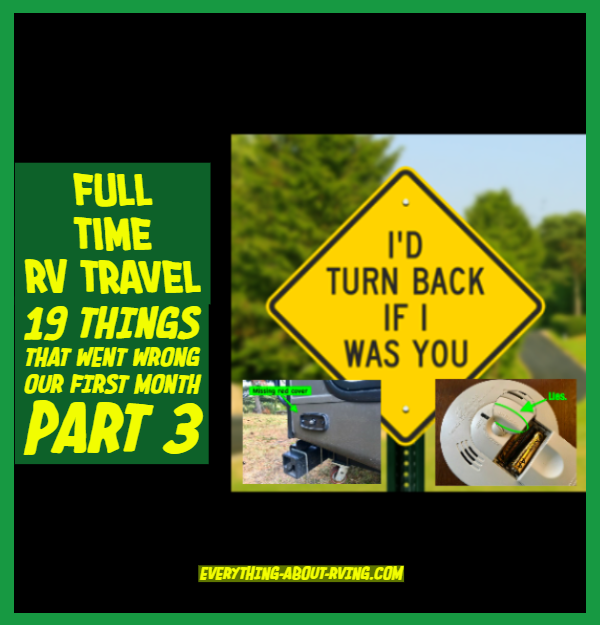 In Parts 1 & 2 we went over the first 13 things that went wrong in our inaugural month of full time RV travel. Some of them were really bad, like dropping the trailer, and others were mild inconveniences, but they are all good examples of what to expect when living in a camper and traveling full time.

There’s no need to read The 19 Things in order, but if you’d like to catch up, the link to our blog is in the bio below.

“Those a-holes are honking at us!”

While driving through a town, we missed our turn. We tried to recover by pulling a circle-the-block move, but this was before we had our RV-specific GPS app and we were foolishly still using Google maps as our only source of navigation.

We read about it, we thought about it, and we had feared it; now we were staring right at it- a soul-crushing, reflective bright yellow Low Clearance sign.

We had- in spectacular rookie-like fashion- not measured the height of our rig and were driving completely ignorant of where it was safe to travel.

This moment seemed like the perfect time to stop in the middle of the road, jam on the hazards, and throw a tape measure into the air. The other motorists disagreed.

Trying to ignore the honking and embarrassment, we quickly shoveled out the measuring tape  until it was about 6” past the highest point. It read 12’ 8”.

We jumped back in the truck and proceeded to drive forward- very slowly- under the sign marked, 14’ - Low Clearance - 14’. 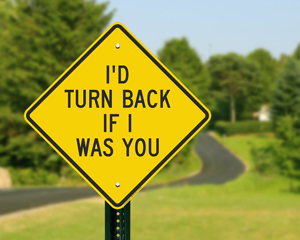 We both craned our necks forward, trying to see if we would make it, but the effort was pointless; we were blind and rolling the dice.

A sigh of relief came bursting from both of us as we cleared the bridge.

Lesson learned: Know your height! We have since been properly measured and use a variety of smartphone apps and navigation tools to avoid low clearances and other potential hazards.

“Why is the water sputtering?”

In our first attempt at camping without water hook-ups, the sputtering water was our tank running on empty…much earlier than we anticipated.

Since our tank was dry and we weren’t expecting to leave yet, we drove to the local store, bought a 3-gallon jug of filtered water for utility and a case of bottled water for drinking.

As it turned out, this was also not enough water for 2 more days.

So, we went back to the store and purchased two more 3-gallon jugs and two more cases of water. We stowed one of each as emergency backup.

This was a sharp lesson in water conservation and we have since learned to be much more conscious about water usage. At this time, we had used 30 gallons in just 3 days, but as of a year later, we can go for a full week on the same amount. 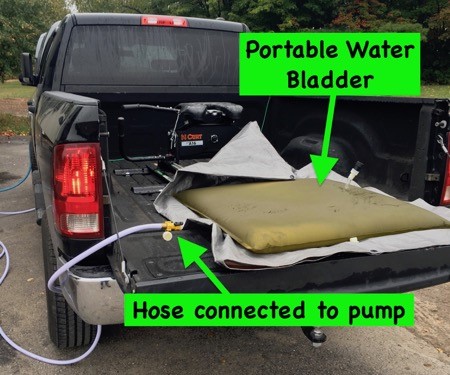 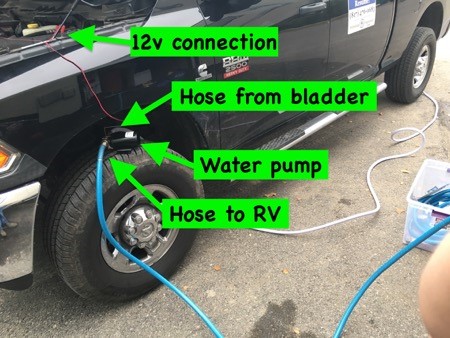 To extend our camping ability and for our own sanity, we purchased a portable water bladder made from extremely tough, food-grade materials, along with a 12v water pump to transfer the water from the bladder to our hose-connection fresh water inlet.

Lesson(s) learned:  When you’re running off of your fresh water tank, conservation is king. And, you always have less water than you think- make sure you have back up.

“Sh*t. We ran over the wheel chocks.”

There are a lot of steps involved in setting up and breaking camp. Usually the more in a hurry we are, the more we forget to do, but we’ve forgotten things when we weren’t it a hurry, too!

We have a checklist. We don’t always use it.

This particular time, we had simply forgotten to pick up the chocks. Our site was on a steep incline, so I thought I was just having to push the accelerator a little more because of this.

Oddly enough, we didn’t even feel the trailer roll over the chock- Lezlie saw them in the sideview mirror as we were pulling away.

Lesson learned: Make a checklist, actually check it, and try not to be in a hurry.

Piercing beeps followed by a stern, yet calm female voice echoed through the trailer as we scrambled to figure out how to silence the smoke detector.

Breakfast- we were cooking breakfast. Nothing was on fire, except the propane burner.

We grabbed a chair to stand on and pressed the button that states, “PUSH TO HUSH.” Lies- all lies! It hushes nothing. Removing the batteries proved to be the only solution. 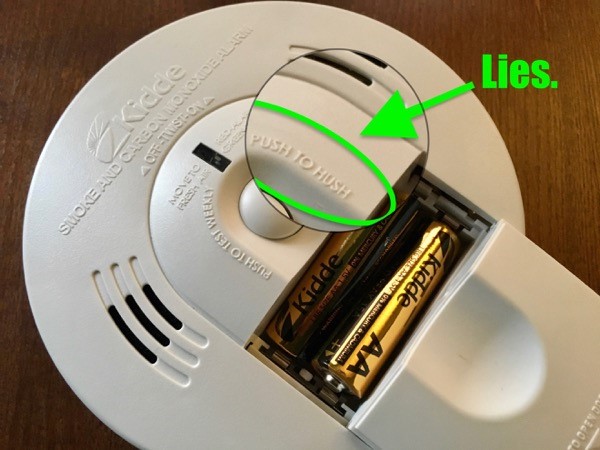 We were pretty embarrassed to have this happen in our practically full campground, but to our relief (and sick enjoyment) we heard 4 other smoke alarms go off throughout the morning.

Lesson learned: Our smoke detector was installed almost directly over our range/oven, which is…dumb. Perhaps someday we will move it to a better location, but for now, we just remove the batteries when we cook.

In all fairness, (a) I was trying to back into a site that was only two (2) feet wider than our trailer, (b) I had to back in at an extreme angle, (c) there were 2 concrete benches bolted down on either side of the site, and (d) there were landscaping bricks piled on pallets opposite the site, so I had very little room to straighten the truck once the trailer was in the site. 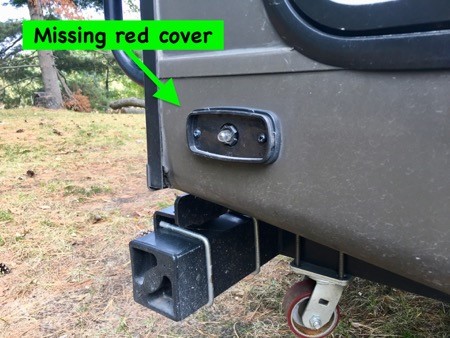 Have I given you enough excuses yet?

Well, this was also only my 2nd time to back the trailer into a site, so it took…a while. There were no other site options and we had to stay here for some work we were doing, so we did it. Broke a light cover on one of the benches in the process, but we did it.

Lesson learned: Be patient, go slow, and use the buddy system.

“Uh…I can see wires and heat ducting under there.”

Our rig has a large piece of corrugated plastic covering the underbelly. At some point in the RV’s mysterious former life, the plastic had been cut open in two spots and reconnected with pieces of thin board, screws, foam sealer and RV mend tape. The tape started to come apart and the cover was sagging a lot; enough to expose the wiring underneath the trailer.

My first instinct was to put more tape on it because I’m not very handy. So, I bought some extra strength, outdoor duct tape and went to work. It didn’t take long before it came apart again.

While moochdocking in my Dad’s driveway in Northern Michigan, we deconstructed the previous repair and basically re-repaired it (a lot better) using stronger board, more screws with bigger washers, and then sealing the gaps with insulation foam. No more tape needed. Thanks, Dad!

Lesson learned: Duct tape will not fix everything.

Thanks for hanging in there and making it to the end of our first month with us!

We’ve now been on the road for over a year and many new things have gone wrong, and we look forward to many more ahead.

We knew this lifestyle would present challenges, and we’re not giving up any time soon. Every day is a new adventure and chance to exercise problem solving skills.

When things go wrong, no matter how stressful, we look at each other, shrug, and say, “We’re learning!”

Another phrase we’ve adopted and found to be true is from the sitcom 30 Rock:

“Everything always works out for the best.” - Kenneth Ellen Parcell 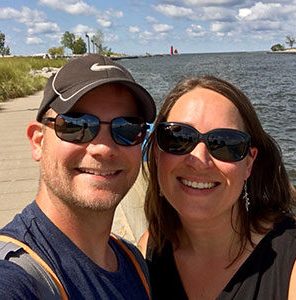 Andy & Lezlie travel the US full time in their fifth wheel travel trailer while operating a resume writing business ResumeLezlie.com and share their experiences & travel tips through their website Unknown Normal and Instagram @Unknown_Normal.

Do you have a comment on this topic? You can leave your comment in the box below.
Recommended Reading For You