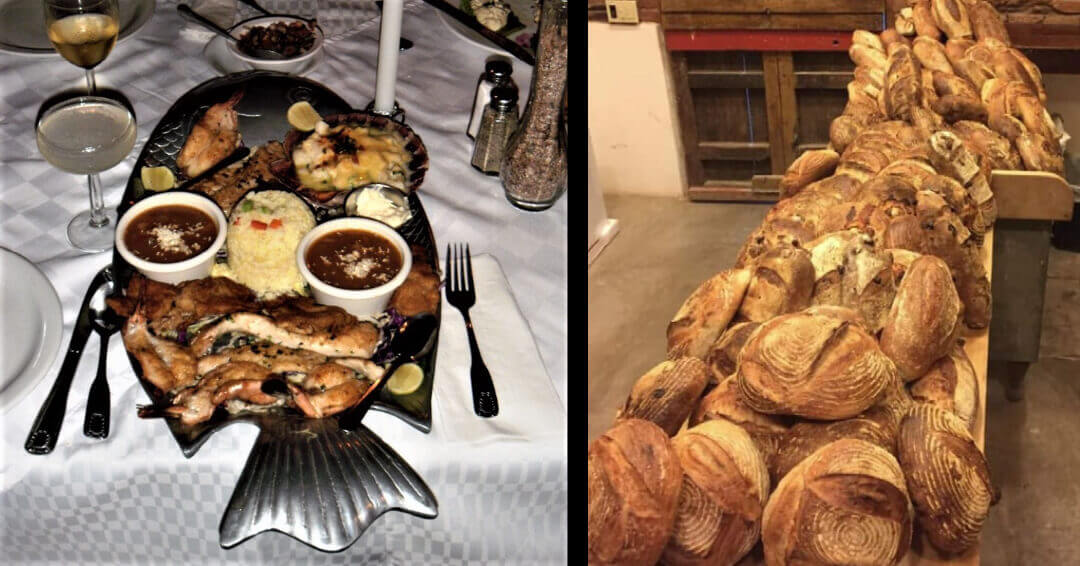 We have been traveling Baja regularly for more than 20 years and, as you can imagine, made many regular stops along the way for breakfast, lunch, and dinner.  Some were Taco Stands, others more developed restaurants.  Over time we shared these stops with friends and incorporated them into our RV tours.  We selected these 3 in BCS because of their ambiance, reasonable prices, unique atmosphere, and personalities.


Roamly RV Insurance - Created By RV Owners Like You 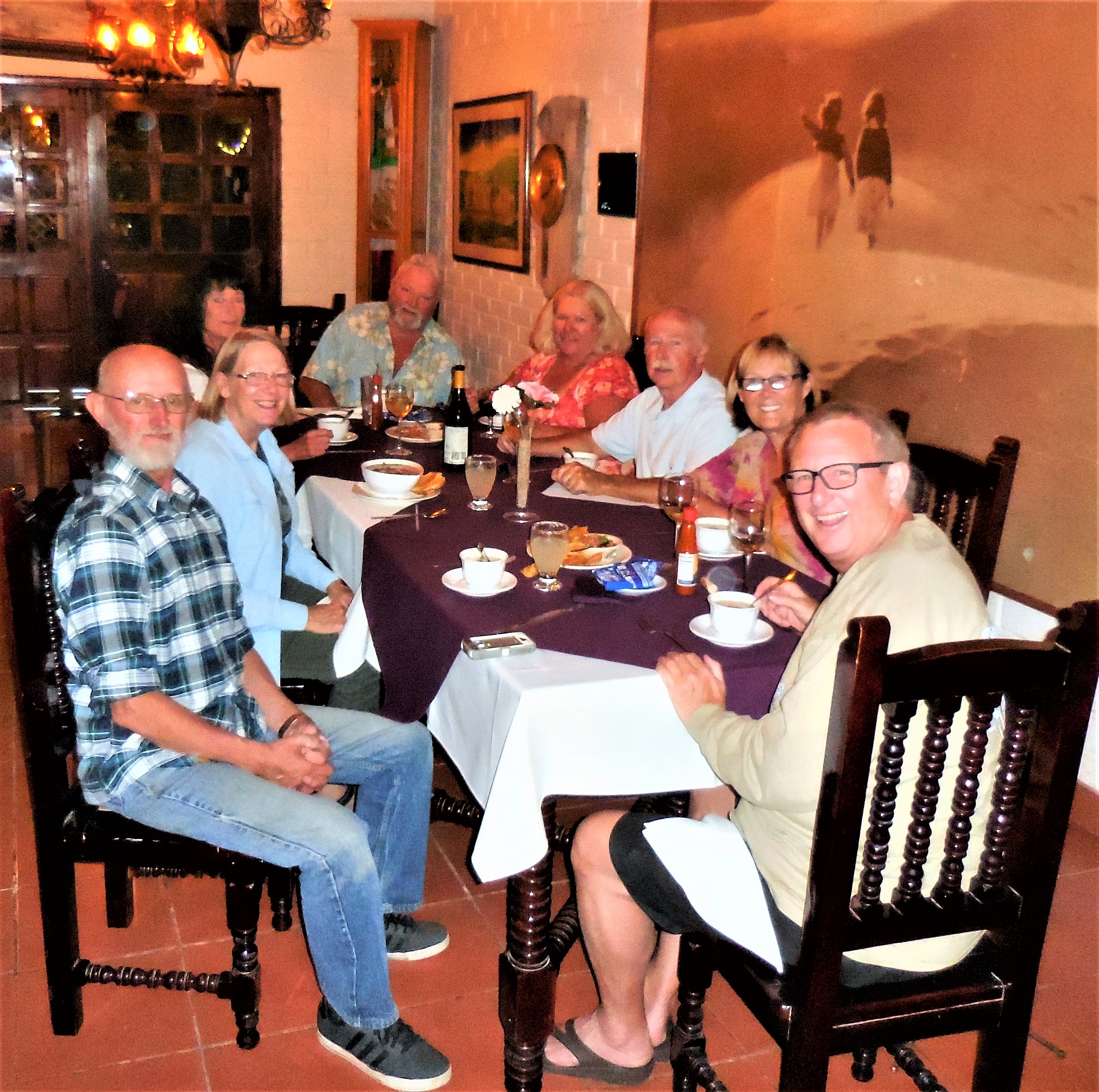 “Malarrimo” beach is on the north-facing shore of a conspicuous “horn” halfway down the Baja Peninsula on the Pacific Coast side.  This mysterious and lonely place was called by the famous Spanish Explorer Sebastián Vizcaíno, the beach of Malarrimo.  The land juts sharply westward into the waters of the California current, generating an intense upwelling along the coast but also carries riches of a different sort: boat wreckage, clothing, first-aid kits, military gear, toys, preserved foods, and many other curios.

The town of Guerrero Negro was founded in 1957 when Daniel Ludwig built a saltworks there to supply the demand of salt in the western United States, now the greatest salt mine in the world.  The town's claim to fame also includes Whale watching when Grey Whales congregate to breed and give birth every winter in the coastal lagoon Ojo de Liebre. 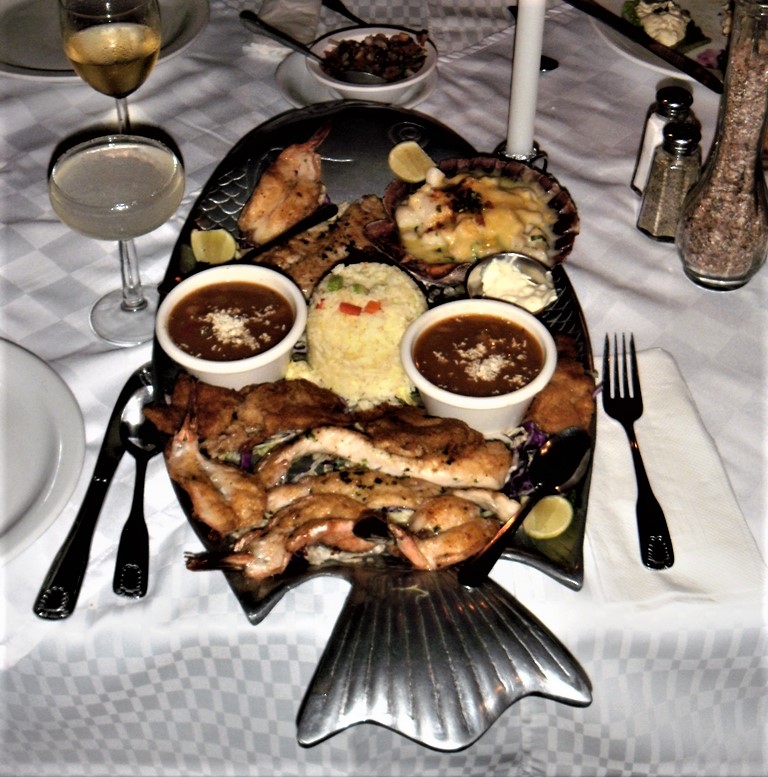 In 1974, the same year Highway 1 was inaugurated, Enrique Achoy López dared to build a Restaurant in town that barely existed outside the company town, now a going concern and family affair.  Enrique opened a Gourmet kitchen and built a discotheque that became the meeting place for locals and tourists alike.  Over the years, Enrique filled the place with objects found on the beach "Malarrimo" that now serve as decoration and small museum.  Malarrimo, the restaurant, has been visited by personalities from around the world and has a well-deserved recognition for the freshness and delicacy of its seafood.  When the President of Mexico visits to see the whales, which they all do once during their term, they eat at Malarrimo.

In addition to the Restaurant, Enrique built an RV Park in 1978, the Hotel in 1986, Enrique Jr. started Malarrimo “Eco-Tours” in 1989, daughter Nena opened the "Casa el Viejo Cactus" gift shop soon after, daughter Monica then opened the Malarrimo Convenience Store, and finally youngest son Tony joined Malarrimo with a degree in marketing and advertising.

We first ate at Malarrimo in the early 2000s and have been taking our groups there for dinner since our first season in 2009/2010.  50 tours plus later we can count the number of complaints about dinner on one hand, about the same number of folks who complain about too much sand when we are beach camping.  People love the atmosphere, ambiance, and mostly the food, including a great wine selection.  Our recommendation to couples is always the seafood platter, delicious and reasonably priced, a menu item only found at an upscale restaurant in the US or Canada.  When our groups go for Whale Watching the next morning, the Wagon-Masters go for breakfast; Lisa orders “Huevos Albanil,” she looks forward to this meal every tour.

There is no doubt that Malarrimo has put Guerrero Negro on the map, a favorite place of travelers and visitors, from the clueless to celebrities, dignitaries, and Mexican political leaders, all thanks to the cuisine of Don Enrique. 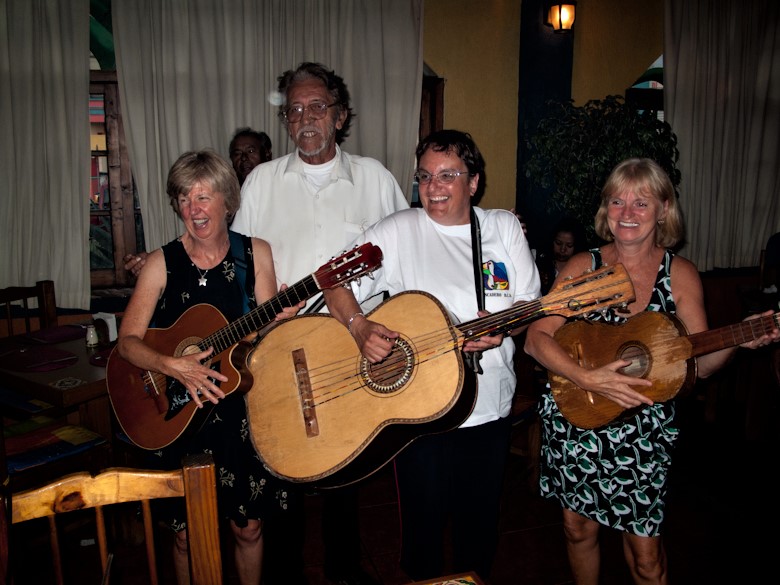 La Paz (The Peace) is the capital city of Baja California Sur and the only large colonial city in all Baja.  Hernán Cortés arrived in 1534 and founded Santa Cruz, which later became La Paz.  A couple of interesting known facts;  The American’s occupied La Paz during the American/Mexican War from April 15, 1847, to February 2, 1848.  From January 10, 1854, to May 8, 1854, La Paz served as the capital of American William Walker's “Republic of Sonora.”  The project collapsed due to a lack of US support and pressure from the Mexican government to retake the region.

La Paz boasts over 300 restaurants; we have frequented many of them.  Mexican friends who live in La Paz introduced us to Los Magueyes in 2008.  The restaurant is named after the magueyes, a species of agave plant from which tequila is made.  When it matures, the plant’s pineapple-like base fills with a sweet sap, called aguamiel (honey water), which is fermented, then distilled twice.

Established in the center of the city in 2004, Los Magueyes has become one of the most traditional restaurants in the city of La Paz, celebrating traditional and authentic Mexican food in a pleasant, relaxed atmosphere.  We now host our “Baja Fiesta” dinners here with a menu that features typical dishes of Mexican cuisine, as well as barbecues, arracheras, soups, salads, an extensive bar of drinks, and its delicious desserts.  Our favorite waiter is Ricardo, a personality everyone enjoys, whose specialty is “Flaming Flan.”  A local band often drops in and is very entertaining; our Baja Amigos are always well looked after, and the reviews from this evening are very positive.  This restaurant epitomizes the friendly nature of the Mexican people and will stay on our itinerary for years to come. 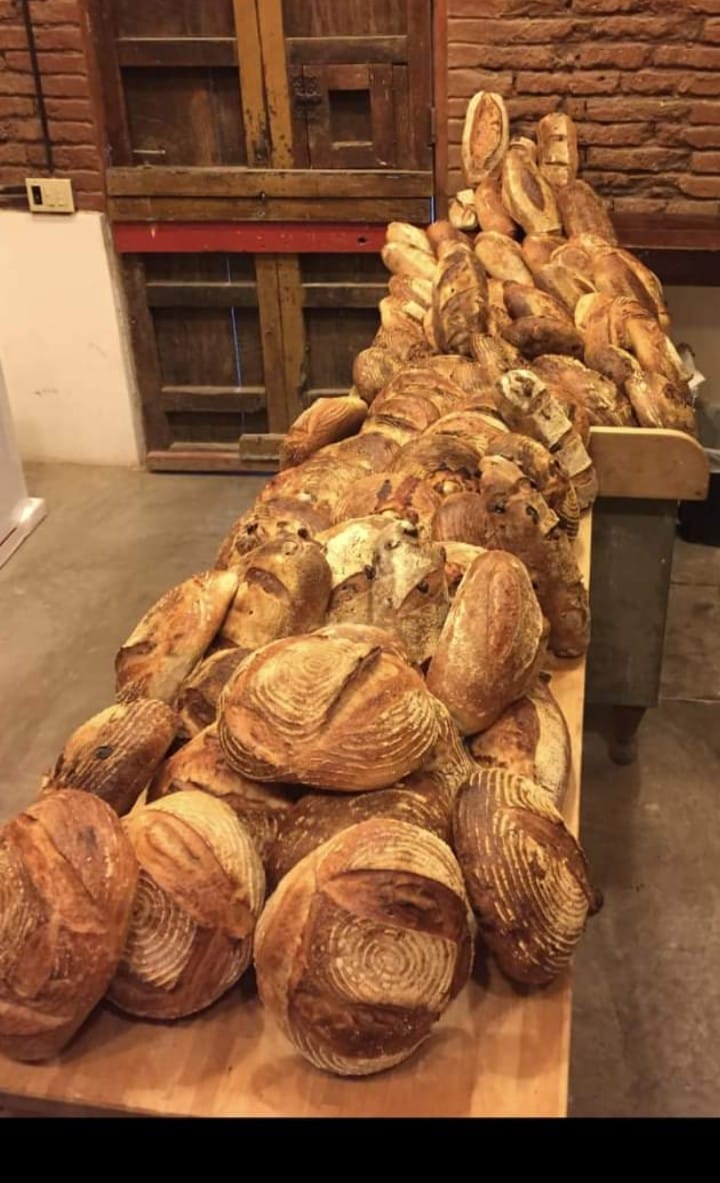 Caffé El Triunfo is located in the former mining town of El Triunfo on Highway 1 between La Paz and Los Barriles.  In 1878, the mine was taken over by the British El Progreso Mining Company and was once the largest city in Baja California Sur, home to more than 10,000 miners.  El Triunfo was the first town in the region to install electricity and telephones.  Pianos and other instruments were brought to El Triunfo from around the world, and a piano museum still exists.  A notable feature of the town is the 47-meter-high smokestack constructed in 1890 called "La Ramona," designed by Gustave Eiffel.

When mines shut down in 1926, the town quickly became a village with a population of 300.  Before we started Baja Amigos, we would just drive through El Triunfo, just another wide spot on Mex 1.  Then came along Mark Spahr, who opened Caffé El Triunfo in 2008 looking for new challenges, better food, a better setting, and room to build a wood-burning oven.  Mark was born in Oakland, grew up in Ventura County, and spent many years living in California before moving to Todos Santos, opening Café Todos Santos in 1993 later making the move to El Triunfo.

It was the 2012/2013 season that our tours regularly stopped for brunch at Caffé El Triunfo, a real treat after a couple of days on the beach at Playa Tecolote.  Fortunately, there is just enough parking available using both sides of the road arriving about 10:30 am, our reservations set for 11:00 am.  Mark has spent years renovating the café indoors and outdoors, laying new brickwork, adding stone slab tables, and planting cacti on ledges.  Often we sit on the lower patio, sometimes as a group on the upper patio, listening to all the sounds of a Mexican village and Ramona towering in the distance. 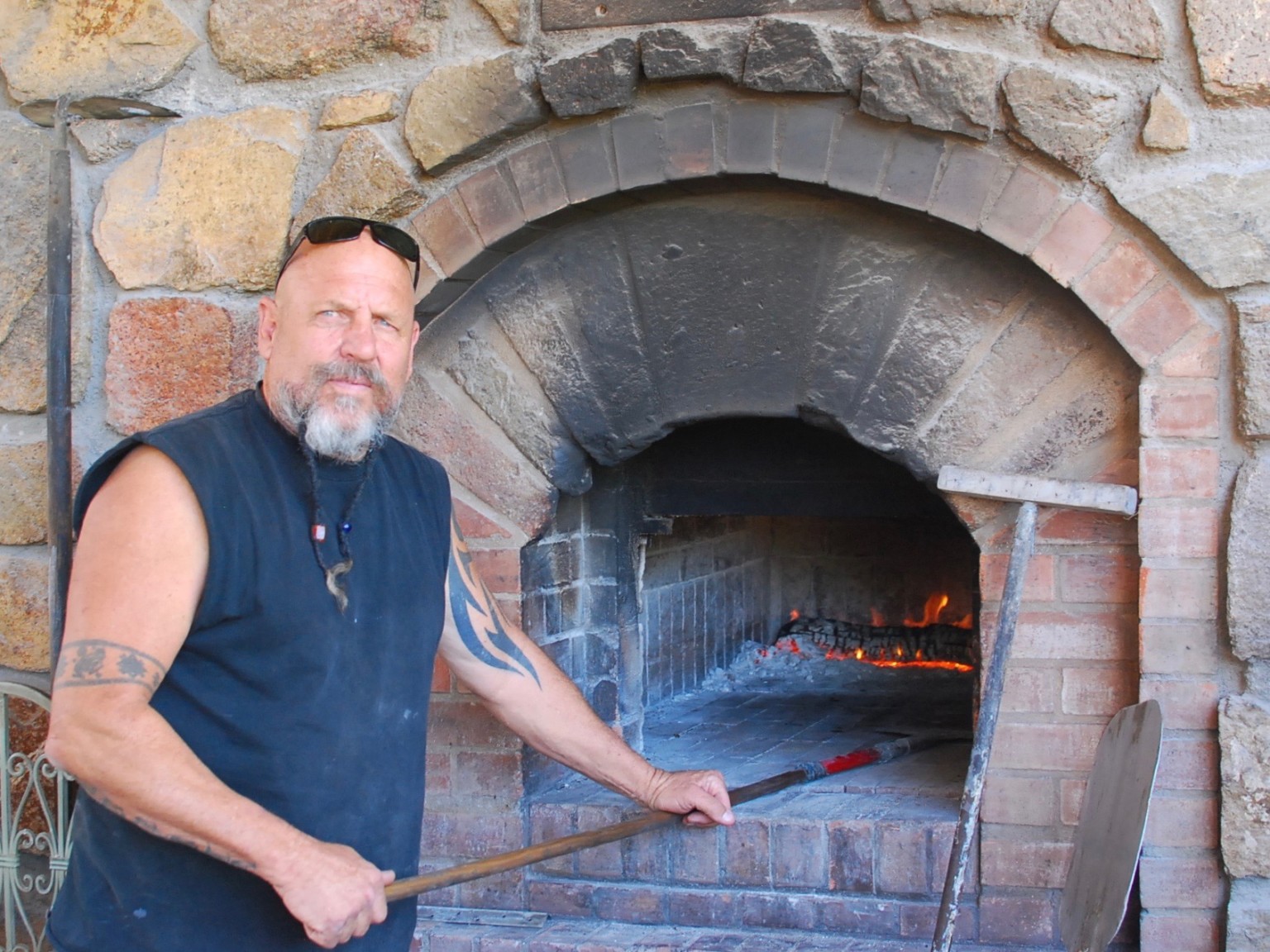 Mark has put together a spectacular menu; Lisa always orders the "chicken enchilada omelet," which comes with fried potatoes, fresh fruit, oven-baked sourdough bread, sliced avocado, and crema.  Folks love the fish tacos made with Ahi tuna, others the pizza cooked in the mesquite fired oven.  I have had the house salad with goat cheese, baby lettuce, cherry tomatoes, pecans, and dried cranberry many times always delicious.  After folks order their brunch, folks have time to make their purchases of freshly made sourdough bread and sticky buns before they are gone.  The prices are not unreasonable given the quality of food and unique ambiance offered by the Caffé El Triunfo.

Mark‘s development of Caffé El Triunfo over the years has led to a total makeover, redevelopment, and revitalization of the entire village.  Undoubtedly, his hard work and vision are responsible for the restoration of many of the original buildings that have been converted into restaurants, museums, boutiques, and El Triunfo is now a tourist hot spot; the transformation is nothing less than remarkable.